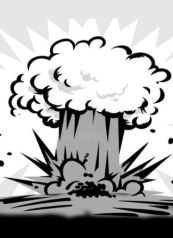 The most secretive institution in India is the Atomic Energy Commission. May it be the nuclear mishaps of Kaiga, the multiple shutting of Kakrapar, the leakages of Rawatbhata, the safety concerns of Tarapur, or the voices being raised by thousands in Kudankulam, the AEC is rarely held accountable. While India’s atomic energy programme is an economic failure and an environmental disaster, its very functioning, undermines the democratic ideals of a country like India.

Inherently, nuclear energy is a technology that is anti-democratic. It creates layers of secrecy between itself and the ordinary citizen. The AEC is never judged by the standards of profitability and accountability that the market imposes on other industries. Nor, like other government-owned and managed firms, do they have to report to the parliamentary committee on public undertakings. In fact, by an act of Parliament they have been made exempt from the scrutiny of the Parliament itself. During times, when corruption is surfacing in almost every sector – from mining, to power, to telecom – can we really trust a body which is inherently unaccountable and lacks transparency?

Kaiga, built on demolished rain-forest, in the event of a disaster, alone has the potential to destroy the rain-forests and ecosystem of the western ghats. The miners and nearby residents are continuously exposed to radiation which can cause numerous health hazards, including cancer. Then there is the ever-present threat of nuclear accidents. Finally, there is the question of the disposal of the wastes, which remain radioactive for thousands of years. Coming to economics, Amulya Reddy, a prominent scientist, has used official statistics of AEC and proved that nuclear power in India is more costly per unit than coal, hydel or solar. Despite contributing a mere 3% of the country’s energy needs, more than 60% of India’s total research budget on energy goes to this sector.

All of this happens when AEC continues to remain a black box. You won’t find much about AEC on Wikipedia. Media won’t cover these things due to it’s structural compulsion to lie. Media having integrated itself into corporate spirals, is no more in a position to take sides with the people and their rightful protests. In-spite of the known and unresolved issues, why the government is adamant on starting the Kudankulam plant forcibly, is something we will never understand. Maybe we suffer from short memories. Maybe we have forgotten Chernobyl? Fukusihma? Bhopal? Corporate over wellness? Power over people? Does that sound democratic?

This entry was posted in Economy, Nature. Bookmark the permalink.