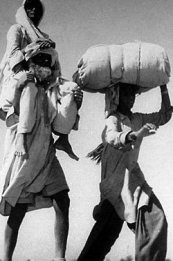 Garam Hawa (M.S.Sathyu, 1973) remains one of the most defining, although underrated films of Indian parallel cinema. The film’s script finds its origin in an unpublished story by Ismat Chugtai, worked on by Kaifi Azmi and Shama Zaidi. The subject deals with the plight of an Indian Muslim family, who chose to stay back in their ancestral home in Agra and not immigrate to the newly formed state of Pakistan in 1947. The film brilliantly sculpts out the most common problem Indians faced during partition – alienation and identity crisis.

The film examines the struggles of Muslims in India who were adamant about not leaving their homes for generations. Balraj Sahni’s portrayal of Salim Mirza is possibly the best celluloid can offer. May it be the tongawallah asking 2 rupee instead of the usual 50 paise from Mirza, or Mirza mentioning explicitly to a possible landlord that he is a Muslim – the very subtle handling of the most hard-hitting scenes is the finest aspect of the film. The film ends with a beautiful poem by Kaifi Azmi-

It is evident that the film was shot with limited resources, with a mere budget of 8 lakh Rupees. However, the quality of the film is unquestionable. In-spite of the film being completely shot on location, with a single camera and lens, Mr Sathyu has worked magic, which only the likes of Satyajit Ray and Godard could pull off in their times. It has to be noted that the film was shot without sound, and the dialogues were recorded and synchronized later. With the skilled cast belonging to the Indian People’s Theatre Association (IPTA), this shortcoming of the film is not even realized in multiple re-watching of the film. After dubbing his dialogues for the film, the very next day, Balraj Sahni passed away. It is tragic that the legendary actor never got to watch one his best performances.