The (not so) grand old man of BJP 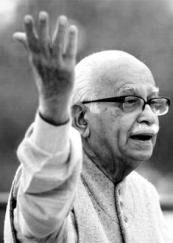 Although a delayed decision, but unlike the dynastic Congress, BJP did stand by its internal democratic principals and went on to choose its PM candidate after much internal debate. But all its glory of being a rock solid organization was put to shame by the fits and tantrums of Mr Advani, who simply failed to realize that external unanimity is as important as internal debates for any given group. However, more than a political debate, the behaviour of Advani raises some very important moral questions.

Advani, clearly one of the tallest leaders of the BJP for years now, stood completely isolated over his opposition towards Modi’s elevation as campaign committee chief for the 2014 general elections. He would have hoped to gain some support from other party senior leaders, but received none. Why did Advani oppose Modi’s leadership in the first place? Congress or leftists opposing Modi is justified on secular lines. But was Advani, the man whose short sightedness led to the Ram Janmabhoomi fiasco and all the massacres that followed, at all justified in his resignation?

It must be noted that, in 2002, Modi nearly lost his job after the Godhra massacre. The then PM Vajpayee had decided to sack Modi. It was Advani who intervened to protect his protege. The protege has today upstaged the mentor. Is this what bothers Advani? Or it is the pure lust for power? It is hard to believe so. After all Advani, who deserved a lot of the credit for increasing the BJP’s numbers in the Lok Sabha from 2 to 182, made way for Vajpayee in 1999. At 85, Advani can as well afford brinkmanship, but is it really in the interest of the party and ideology he dedicated his entire life to?

Compare Advani’s position with that of Mrs Sonia Gandhi. On one hand we have the lady who has become the ‘british-queen’ of a major political power in-spite of showing no interest towards becoming the Prime Minister. On the other hand, we have a man with a political career as old as the country itself has fallen pray to his own insecurity. With a few cards well played, Advani could have as well become the kingmaker, the pitamah of BJP.

In-fact, his situation can be compared with an actor denied of the Oscars in-spite of deserving it for decades, but being overruled every time by other actors. Sonia Gandhi, on the other hand holds the moral position of the actor who refused the award. And as common men, we love sacrifices. The best thing now for Advani is to retire gracefully and bring an end to his long eventful political career. Well, that too, after the dust of the 2014 elections settles.

This entry was posted in Philosophy, Politics. Bookmark the permalink.

2 responses to “The (not so) grand old man of BJP”