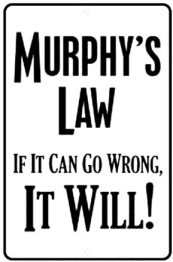 Mr Gordon Moore in 1965 published a paper, where he stated that the number of components that could be incorporated in an integrated circuit would increase exponentially over time. Since then, the number of components on the chip has doubled every two years. This compacting trend has given rise to the very famous Moore’s Law. Theorists for long have wondered if Moore’s law will ever come to an end? Applying Murphy’s law (see image) to Moore’s law, it will. The results – interestingly coincide with Karl Marx’ theory of Surplus Value.

According to an analysis [1], in 1972, the size of individual chips was 10 microns which is sliced down to 22 nanometres by 2013. The miniaturization of chip lead to highly sophisticated and expensive fabrication of chips that only a few major semiconductor companies can manufacture. This led to the obvious monopolization of a few players in the industry. Adherence of semiconductor industry to the Moore’s law has lead to another negative implication – obsolescence. Due to rapid improvement in the technology, the predecessor technologies become obsolete. While this leads to frequent versions of every gadget we can lay our hands on, the chances of production costs remaining unrealized gets higher, along with the non biodegradable waste it generates. It has also led to guys who stay updated with a few mobile apps, pretend like modern scientists. But let’s leave that for another discussion 😉

One must understand that the size of a chip cannot cross the atomic level beyond which a fundamental barrier will arrive. Also, when the transistors are placed too closely, problems of heating will hinder further development. The monopoly is so deep, that in-spite of the Semiconductor Integrated Circuit Layout design Act, 2000, which solely aims at protecting the intellectual property in chip designs, not a single application has been filed in India. The ditch Moore’s law has dug for itself is exactly what Marx discusses as the theory of Surplus value in Das Capital. Marx in his Labour Theory further says that the growth will be sustained by digging old markets more effectively (through advertising), or by opening up and exploiting newer markets – exactly what has been happening in the semiconductor industry. Moore’s law has had a good run, but it is certainly heading towards dead end.

This entry was posted in Economy, Philosophy, Technology. Bookmark the permalink.

One response to “Moore Murphy Marx”