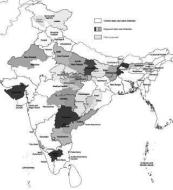 Winston Churchill had said that India – if allowed to become independent – will disintegrate into smaller nations. If all the present demands for separate states are fulfilled, our 29-state country will soon become a 50-state country. Let us learn from our mistakes in the past, and not repeat the short sighted approach, that led to the birth of Andhra in violence, and its eventual death in even more bloodshed and horror.

In 1920s when the Congress was a national movement, its leaders formulated a policy of linguistic restructuring of India; which then seemed logical due to the artificiality of colonial Britain’s division of the country into presidencies and the suppression of local cultures. Post independence, however, the same leaders recognized a potentially disruptive side to the idea of promoting linguistic identities. On the initiative of Dr Rajendra Prasad, a Linguistic Provinces Commission was set up in 1948, which recommended the restructuring of provinces on the basis of geographical continuity, financial self-sufficiency and ease of administration. But the Nehru Government sat on the report until Potti Sriramulu fasted to death which led to the gruesome riots of 1952. The very next year, Government appointed the States Re-organisation Commission and Andhra became the first linguistic state of India.

60 years forward, and we are left with divided identities, and political parties thriving purely on separatist and fascist hatred. Demands for Gorkhaland, Bodoland and Karbi Anglong are already erupting into violence. Vidarbha and as many as five regions of UP are sizzling. Violent movements for formation of newer states are ridiculous in the first place, especially when they are being driven on communal and linguist lines. There is a good case for scientifically conceptualized smaller states in a country of perplexing diversities. Such a set up can help the advancement of areas far removed from the capitals of big states and therefore neglected. But this is a matter that needs to be handled with the utmost care and wisdom, keeping in mind the country’s long-term interests and not the short-term advantages of one or the other party. More states will mean more MLAs, more bureaucrats and more middlemen. Unless this leads to better lives to those at the bottom, masses will continue to pay the prices of petty political games they play.

This entry was posted in Politics. Bookmark the permalink.

One response to “On divided identities”