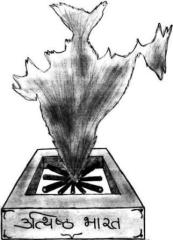 The oldest available copy of Chanakya’s Arthashastra, written in 4th century BC, preserved at Mysore’s Oriental Research Institute (ORI) is peeling off. This manuscript is 450 years old. There is not even a proper locker to keep it safe. Predating Machiavelli by about 1,800 years, well, Chanakya is the righteous father of political science, and this is the state of his work? About 60,000 other manuscripts at ORI have escaped two fires at the institute. The chambers are not fireproofed yet.

It is even painful to see most people losing interest in the traditional knowledge available. Let’s not forget that it was Chanakya who first saw the numerous Janapadas as one people’s union against imperialist forces. It was the will and skills of one man that Alexander could never invade India. In our race for pseudo liberal Facebook updates against corruption, let’s not forget that more than 1,000 years ago, there was zero tolerance towards financial bungling in India. Inscriptions in the southern state of Tamil Nadu clearly indicate how intolerant civil society was against corrupt practices and the violators of ethical framework.

A well-evolved democratic system was functional, starting at the Saba level, between the eighth and the 16th century in South India, irrespective of the ruling dynasties: the Cheras, Cholas, Pallavas, Pandyas and Vijaynagar. The members of a Saba were elected by the whole community of the village by an organized system. Such has been our rich and exemplary past. We must learn from past, and contextualize it the right way, in order to make the future beautiful for the masses.

This entry was posted in Culture, Economy, Personal, Politics. Bookmark the permalink.