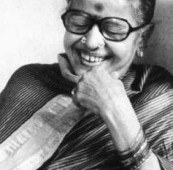 M.S. Subbulakshmi has inspired many generations, through her divine voice and her rare qualities of humility, compassion discipline and principles of conduct. Her quest for perfection and sincerity of effort were not reserved for the stage. Her own simple lifestyle and donation of most of her earnings to charity were the testament to the person she was.

Kunjamma, as she was called in her young age, was born in Madurai on September 16, 1916, to veena player Shanmukhavadivu Ammal and Subramania Iyer. Her grandmother Akkammal was a violinist. Her mother, from the devadasi community, was a music exponent and a regular stage performer, but due to her meager income, she supported a family of three children, uncles, brothers, and their wives.

Initiated into music at a young age, Kunjamma learnt her first lessons from her mother. Formal music lessons began with Semmangudi Srinivasa Iyer and subsequently in Hindustani music under Pandit Narayanrao Vyas. She learnt pallavi singing from the doyen Mazhavarayanendal Subbarama Bhagavatar. Soon she was singing on stage, with her mother playing the veena. Kunjamma’s voice released for the first time when she performed a seemingly impossible high-pitched Khamboji in “Marakatavadivu”. She was only 10 years old.

Soon concert notices announced “Miss Shanmukhavadivu” as an accompanist to “Miss Subbalakshmi of Madurai” and Kunjamma began to draw people’s attention with her melodious voice and innocent demeanour. In 1930, Shanmukhavadivu moved to Chennai in an attempt to establish her daughter’s career.

In Chennai, M.S. met Thiagarajan Sadasivam, a freedom fighter and a journalist. It was also a meeting of minds. In 1940, they got married. Sadasivam’s firebrand nationalism identified M.S. with the freedom movement. Rousing national songs were part of her concerts and the couple remained close to national leaders. She became known to Jawaharlal Nehru and Mahatma Gandhi through C. Rajagopalachari, who was Sadasivam’s friend. In 1941, Sadasivam took M.S. to meet Mahatma Gandhi, for whom she sang bhajans. Three years later, in 1944, she performed five concerts to raise funds for the Kasturba Memorial Trust, which worked for raising standards of women in rural India. In the following years she gave benefit performances to collect funds for a variety of social causes.

Between 1937 and 1947 M.S. acted in numerous movies including Seva Sadan and Shakuntalai. She played the male role of Narada in Savitri to raise money for launching Kalki, a nationalist Tamil weekly. Her role of the Rajasthani saint-poetess Meera in the film by the same name, gave her national prominence. This movie was re-made in Hindi. By the 1950s, M.S. was a household name but her success brought her only humility and no arrogance.

Soon, she started to focus only on singing. Her seeming effortlessness was rooted in technical mastery, endless practice, restraint and constant self-appraisal. Her Hindi bhajans made her known beyond the south. Her thyagaraja kritis too became popular across the country. Legendary violinist and conductor Yehudi Menuhin was enraptured by the golden voice, and Zubin Mehta was reluctant to take the stage after an M.S. concert. Pilgrims thrilled to her voice which amplified in temples from Kedarnath and Puri to Dwarka and Kanyakumari.

Subbulakshmi’s husband Sadasivam accompanied and mentored her. When the Music Academy conferred on her the title of Sangita Kalanidhi – the first woman to receive it – in 1968, she described Sadasivam as her friend, philosopher and guide. M.S. always maintained a low profile, content to let her husband be her public face. M.S. began withdrawing from public concerts from the 1980s, performing only for exceptional causes. She stopped singing after the demise of her husband in 1997. For an artist of world acclaim, M.S. never gave a single interview, letting her music speak for itself.

None of that stopped her from becoming a national hero. She received numerous awards, including the Padma Bhushan (1954), the Ramon Magsaysay Award (1974), the President’s Award, the Padma Vibhushan (1975), Kalidas Samman (1988), Konarak Samman, Fellowship of the Sangeet Natak Akademi, the Hafeez Ali Khan Award, the Indira Gandhi Award for National Integration and the Desikottama. She was conferred the highest civilian honour, the Bharat Ratna, in 1996. She was bestowed with enormous prize moneys with these awards, most of which she gave away in charity. Between 1944 and 1987, according to records, M.S. did two hundred and forty four charity concerts.

M.S. Subbulakshmi left us on December 11, 2004. She has been gone for nearly a decade now, leaving a huge void in the lives of the followers of her grand music and her divine aura. The enduring legacy of the music she created and the person she was will inspire generations to come.

This entry was posted in Culture, Music. Bookmark the permalink.