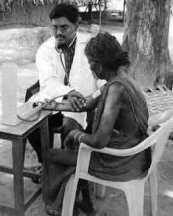 There was a time in cinema where almost every film would have a scene where a doctor would make a house visit to see the bed-ridden patient. On his way out, his leather bag would be carried by the patient’s son, and the doctor will stop at the door, and reveal in hushed voice about the patient’s suffering from tuberculosis, or cancer. Those gray haired doctors were accessible over phone and often themselves called the patient, just to know how was doing.

The portrayal of doctors in cinema has changed significantly over years. Today doctors are portrayed in absolute professionalism, in white vibrant uniforms running around in high rise hospitals. The last film which cared to show the human side of doctors was Munnabhai MBBS, which too focused on doctors in urban setup. Interestingly, with passing time, the idea of a doctor visiting a patient has vanished from cinema, leave alone from our real lives. The human side of doctors is rarely shown. According to P Sainath, there are only 381,978 registered doctors in India. This is less than the number of engineers (750,000) India produces every year. This is even lesser than the number of lives (450,000) claimed by Tuberculosis every year, no matter what they mean when they say that tuberculosis is cured. Even worse is the number of nurses (111,235) in India, which is a different but an equally serious issue. This means there is just one doctor or nurse for every 2,400 people. The equation is heavily skewed, since, a majority of the doctors work in urban hospitals. Only 20% of hospital beds are in rural areas where more than 80% Indians live.

80% of people’s health costs are personally or individually borne. With an utter breakdown of the public health care system, these numbers are not surprising. Even within the medical fraternity, the incomes of doctors is highly skewed. Senior doctors earn far more than young ones struggling to set up their practice. It is a byproduct of the corporate intervention in the medical system. If an engineer after a certain age, becomes a manager and earns highly, why should the doctor be far behind? Somehow, the doctors are becoming aloof from patients who find it difficult to travel, like the elderlies and several other extremely critical patients, like the ones undergoing a stroke, or a cardiac arrest. Most elderly people have medical problems which needs periodic attention. Amidst all this, young doctors must try to build their practice by visiting such patients. This will not only cater to a need in the society, but also help the young doctors establish themselves. Small co-operative groups of doctors can run such organizations. In urban areas, this has the potential to become a huge success, where IT is making everything – from books to food – available at the doorstep. In villages, where the situation is far more severe, it will at-least start a good trend and enhance the doctor’s involvement in real issues.

This entry was posted in Culture, Film. Bookmark the permalink.