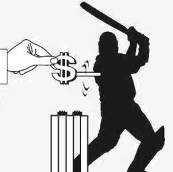 So much of tamasha this year! From Shahrukh Khan insulting a security personnel, to Siddharth Mallya always trying to seek limelight with his obscene language, to players getting caught for match fixing. IPL has replaced even WWE when it comes to filthy made up entertainment! From Mumbai rave party with cocaine being openly used, to the five-star punching of a fiance-boyfriend in Delhi. Many team owners paid players more than the publicly stated price. How can these barons justify this black money trade?

The most frightening finding of IPL this year was the role that women played in match fixing negotiations. Actually, the role of women should have been questioned the moment Lalit Modi started importing white-skinned ‘cheer leaders’ for IPL matches. Last year Gabriella, a South African cheer leader, said that a cheer leader was a ‘walking porn’ and cricketers were full of ‘flirtatious, inappropriate’ behaviour. Instead of an inquiry and remedial action, she was immediately thrown out of IPL. Unlike in US, cheer leading is not a college activity in India. Indecent dancing for pleasing male audience is not only degrading but also inappropriate in so many ways.

Questions on role of women in IPL have hit us harder than ever, when this year, underneath the Zohal, Sahil, Mallya and Luke drama, the questions that surfaced were alarming. Zohal Hameed herself claimed that she had no understanding of cricket or IPL. In that chase, what was she doing in Delhi amid cricketing VIPs? Is it true that a team owner had brought her to India for the current season? What was her role? Why was she all over Siddharth Mallya as claimed in his tweet? What was the off court settlement after which Zohal withdrew her charges? And why did media after an initial hype, suddenly go silent about this issue? Well, these are questions, among many others, answers to which, we may never know.

This entry was posted in Sports, Television. Bookmark the permalink.