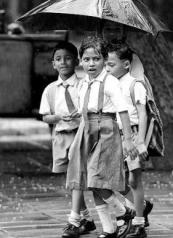 Government vs private schools is a relatively new debate in India. While the concept of government aided schools were there from a long time, the first private schools of India were established to educate the children of English officers and those of privileged Indian families. Later, prominent Indian institutions came up with ideas of establishing private educational institution. Over the decades, these schools provided free India with its first bureaucrats and administrators.

The free and democratic India universalized education, which was once a privilege for the upper castes. But, generally speaking, this universalization happened only in urban areas. These private schools further distanced the rural-urban educational divide. For most rural India, government schools took charge of educating. These government schools suffered from low teacher morale, high dropout rates, and rampant absenteeism among both students and teachers. This further led to mushrooming of lower-end private schools in the last two decades in suburbs. This was the market’s response to the rising demands for English education.

As this happened, government schools became synonymous with mass education and were increasingly filled with the poor who aspired to be educated. This is exactly where Indian school education stands now. This deep divide between the two systems has fostered two distinctive streams of education and thereby two exclusive educational and life experiences. The alternative private schooling system has contributed to a social transformation by creating an educated middle class that values economic growth but not the social values. As Right to Education is taking shape, it is high time the government schools enhance their standards. If this doesn’t happen at the right time, rural India will continue to produce labourers, only educated ones.

This entry was posted in Education. Bookmark the permalink.

One response to “The education divide”