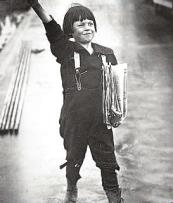 There is finally good news from Girangaon – the village of mills, the city of gold- you name it. Around seven thousand retrenched mill workers received subsidized homes built by the government on lands that once held the textile mills of Mumbai in which they worked. The homes were allotted based on lucky draw- yes- in a game of fate. Well, fate still awaits the 95% of mill workers who seek justice even today.

Girangaon was the name commonly used to refer to the 600 acres area in central Mumbai, which had almost 130 textile mills- most of which were privately owned, and some owned by the state, i.e. the National Textile Corporation (NTC). The mills of Girangaon contributed significantly to the prosperity and growth of Mumbai during the later nineteenth century. It led to the transformation of Mumbai into a major industrial metropolis. The textile industry was offered government incentives in the form of long term leases, as mills stimulated the economic growth and employment.

Major sickness in the textile industry set in around the 1980s, mainly due to diversion of profits and lack of modernization. To oppose the layoffs that followed, many mill workers went on strike. Mumbai witnessed real estate boom around the same time. These lands, once leased to mill-owners at rates as low as 1 rupee per square-metre, were sold as prime real estate, and the industry was systematically shut down. The mill owners played in crores, while lakhs of mill workers lost their daily livelihood. Need not mention, this was accompanied by apathy of the central and state government towards the problem.

The strike collapsed, and the once called Manchester of the East- the city of Mumbai, and the lives of its people were changed forever. Today almost all the mills are closed. The rate for an apartment in Girangaon area is about Rs 50,000 per sq ft. Yet, the mill workers have continued their fight. It is interesting to ask oneself if they had any other choice.

What happened to these 3 lakh mill workers? Well, a few sought employments in other industries while many left the city. Some committed suicide, while others joined the local criminals and thugs and led to the rise of mafia in Mumbai. Some continued to live and fight for justice.

As strikes continued, during the nineties, the Government finally accepted the rights of the mill workers to the mill land. In 2001 the tenants of existing chawls on mill land were given protection. The government set up a monitoring committee for payment of compensation to mill workers and mandated that children of the workers should be given jobs in enterprises coming up on mill lands.

The Government also reserved one-third of Girangaon’s space for mill workers housing. Then came the bureaucrat Ramanand Tiwari (yes, of Adarsh scam fame) who claimed that the one third formula applies only to the open spaces of Girangaon. This left the workers with very little space. This decision was challenged, and later ridiculed in Indian courts. The mill owners, supported by the highest priced lawyers in the country, won in the Supreme Court in a tamasha that followed in 2006.

Well, these textile workers never made news, but never gave up either. While Mumbai went on to become the fashion capital, these deprived men and women continued their fight for years, for political reasons and otherwise. Thousands of people marched on streets. The government finally accepted the demand of houses for all the workers on the rolls before 1982, and set up a committee to identify more land for this purpose, not necessarily in former Girangaon. The price of the houses were set at Rs. 3333 per square ft, which was still high, yet low compared to the prevailing market price of about Rs. 35,000 per sq ft. Loans at low rates of interest were made available so that mill workers are able to buy.

Well, the land needed to accommodate these 1.5 lakh textile workers is vast. However, on 28th of June 2012, out of the space that was made available, about seven thousand of these mill workers received the basic amenity of housing, on the basis of lucky draw. The makers of the city of Mumbai, the textile workers, finally had a reason to smile.

Three decades have passed since the injustice began. Finally justice has come to less than 5% of the victims, and the whole Girangaon celebrated. Guess this is the spirit of the city, a reason that it still lives, it still fights.

7 responses to “Good news from Girangaon”