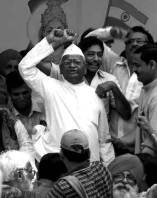 UPA ministers claimed that people outside the parliament have no say in framing of a union legislative bill. They claimed that this power belongs only to the parliament. I need not mention that they are trying to divert away the focus from the whole issue. But even if, momentarily, I believe in these hypocritical tantrums of our members of parliament, I want to ask them a few questions.

Since the commencement of parliament’s monsoon session, many urgent bills of utter national importance are being ignored. And now you ministers of parliament have found a better excuse by blabbering over the Anna issue. How do you justify this? Corruption and Land Acquisition are indeed important issues India faces today, which can be solved by passing and implementing better laws. You, the ministers of parliament must come out with laws that sort out the problems that are inhibiting the growth of our nation and damaging its image globally.

Many important finance-related bills are pending, which include banking laws amendment bill, factoring and assignment of receivables bill, pension fund regulatory and development authority bill, insurance laws amendment bill and life insurance corporation bill. And mark my words, by the end of the monsoon session of parliament, many of these bills will remain stagnant. In spite of this, you claim that it is the power of MPs to make laws for the nation. Well, let me remind you. It is not your power. It is your duty.

For so many decades, you have been joking around with both Land Acquisition and Lokpal bills. Why don’t you members of parliament realize that we countrymen are not interested in knowing whose cupboards are having more skeletons or whose quivers are having sharper arrows? We don’t follow the parliament to see you fight and make fools out of yourselves. If you are so concerned about masses, why don’t you break your conventions? Let the parliament work for 16 hours and all days of the week till all the bills are cleared beautifully. Let all those parliamentarians who can contribute, participate. If the people of this country can come out of their slumber, why can’t you, the representatives of the people do the same?

It is not true that all politicians are corrupt. There are clean, educated and concerned people in the parliament as well. If I were one among the cleaner members of parliament, I would have resigned. I would have resigned against the tyranny this government. I would have resigned to see a corruption free country, a clean and vibrant India. But if you have decided to do nothing and scream in the parliament, if you are unworthy and unwilling to work and solve the problems that are so critical to the nation, why shouldn’t we, the people whom you represent, remind you of your duties? Remember. You might have written the constitution of India, but the preamble to the constitution starts with- “We the people of India!”

People in a democracy only get as must as they deserve. The people have risen. The system must rise and give them what they deserve. Anna Hazare is the face of the aspirations of Indian people. Even if he fails, people will find someone else. The next one might not be as peaceful.